INFORMATION FOR THE PUBLIC
Thursday 22 October it will be possible to attend the screening of the film The Trial by Orson Wells until 1 pm.


FRANZ KAFKA
Franz Kafka, (1883, Prague, Bohemia, Austria-Hungary [now in Czech Republic]—1924, Kierling, near Vienna, Austria), was a German-language writer of visionary fiction whose works express the anxieties and alienation felt by many in the early 20th-century Europe.

MARTIN KIPPENBERGER
(1953, Dortmund, Germay – 1997, Vienna, Austria) was one of the most influential German artists of his generation, alongside with Albert Oehlen and Günther Förg. Kippenberger’s short career offers a humorous yet bitter commentary on contemporary world. His paintings, sculpture and installations were characterized by a desecrating, caustic and ambiguous approach to the art system and the role of the artist.

ORSON WELLES
(1915, Kenosha, Wisconsin, US - 1985, Los Angeles, California, US) was an American movie actor, director, producer, and writer. His innovative narrative techniques and use of photography, lighting, and music to further the dramatic line and to create mood made his Citizen Kane (1941) one of the most influential films in the cinema history. Franz Kafka’s novel of existential dread was a good match for Welles’s baroque pessimism, and, indeed, he considered The Trial (1962) as one of his best movies. Anthony Perkins, Welles him-self, Jeanne Moreau, and Romy Schneider made for an exceptional film cast.

TANGERINE DREAM
is a German music band founded in 1967 by Edgar Froese (1944 - 2015), who was the only constant member of the long-lived, ever-evolving group. They are considered pioneers of the early days of electronic music. Their constant sound explorations have led them to abandon conventional instruments and become among the first to use synthesizers. The most appreciated works of Tangerine Dream were Phaedra (1974) and Rubycon (1975). In addition to releasing dozens of albums, Tangerine Dream created many movie soundtracks.

“K” is a project that features three elements in dialogue with each other: the fundamental work by German artist Martin Kippenberger The Happy End of Franz Kafka’s “Amerika”, the iconic Orson Welles film The Trial and the electronic music album The Castle by Tangerine Dream.

The project, curated by Udo Kittelmann, refers to three unfinished novels by Franz Kafka: Amerika (America), Der Prozess (The Trial) and Das Schloss (The Castle) published posthumously between 1925 and 1927. The exhibited artworks are personal readings of Kafka’s subjects and atmospheres, possible interpretations of his three novels which, according to Max Brod, form a “trilogy of solitude”.

At the centre of “K” is Martin Kippenberger’s installation The Happy End of Franz Kafka’s “Amerika” (1994), on display on the ground floor of the Podium and for the first time exhibited in Italy. Based on the novel America, the work reimagines a sequence of the book in which the protagonist Karl Rossman, after travelling across the United States, seeks employment in the “world’s largest theatre”. The artist translates this literary image into a complex installation. He recreates a vast soccer field that hosts a series of collective job interviews and occupy it with a large number of furnishings (tables, vintage design elements and flea market chairs), works by other artists and objects from his previous exhibitions.

The second element of this trilogy is Orson Welles’ film The Trial (1962), inspired by Kafka’s novel of the same name and screened at the Cinema. Orson Welles wrote and realized a dream-logic black comedy drama movie, considered by the critics as one of his masterpieces for its scenic design and cinematography. The combination of Kafka and Welles was defined as an “alliance of shockers”.

“K” is completed by the album Franz Kafka The Castle (2013), to be played on a loop in the Cisterna. This enclosed exhibition space is transformed in an evocative and comfortable environment, where visitors can hang out and listen to the music by the German electronic music band founded by Edgar Froese in 1967.

As underlined by Udo Kittelmann, “we may also view ‘K’ as a triptych, an exhibition that resembles a tripartite, triple-layered picture. The three parts can be read together as a remarkable allegory of the vicissitudes of life, or, in Kafka’s words: ‘All these parables really set out to say merely that the incomprehensible is incomprehensible, and we know that already.’” 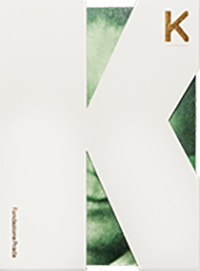