The first one-man show dedicated to Marc Quinn (London, 1964) in Italy—considered one of the most interesting exponents of Young British Art—represents an important occasion for reviewing the artist’s creative development, presenting three works shown for the first time ever.

The exhibition opens with the sculpture Continuous Present (2000), a kind of time machine consisting of a reflecting stainless steel cylinder, round which revolves slowly a human skull supported by a metal arm. Turning on its own axis, it completes a revolution once every thirty minutes. The spectator, as he approaches the work, is reflected on the metal surface of the cylinder, and the coincidence between his reflection and that of the skull establishes the contact between his present and his future that is a kind of metaphor of the existential journey of each individual. The reality of living and dying are superimposed by the reflecting surface. They coincide.

Peter Hull, Selma Mustajbasic, Jamie Gillespie, Alexandra Wetsmoquette, Tom Yendell, Catherine Long, Stuart Penn, Helen Smith: Group Portrait (1999–2000) is a gallery of sculptural portraits consisting of eight marble figures. Portrayed nude and life size, they represent four men and four women. All eight statues portray human beings deprived of one or more limbs as a result of birth, illness or accident. The work as a whole is a further reflection by the artist on the relation between the inside and the outside dimension, a theme tackled by Marc Quinn in previous sculptures which had recourse to his own bodily image. What interests the artist is the fact that the beauty and integrity of the soul is not automatically reflected in physiognomy and in physical characteristics and the expansion to the relationship between classical and contemporary sculpture.

Garden (2000) is a real botanical garden, full of plants and flowers coming from all over the terrestrial globe. They are displayed in full bloom, and are potentially eternal: an unreal dimension that cannot exist unless produced artificially. All these plants and flowers, about a hundred, are maintained in a state of maximum splendour by being immersed in twenty-five tons of liquid silicone fallen at a temperature of minus 20 degrees Celsius. Absolute beauty and infinity co-exist because reunited by the miracle of an impossible garden: it is the materialisation of paradise lost. 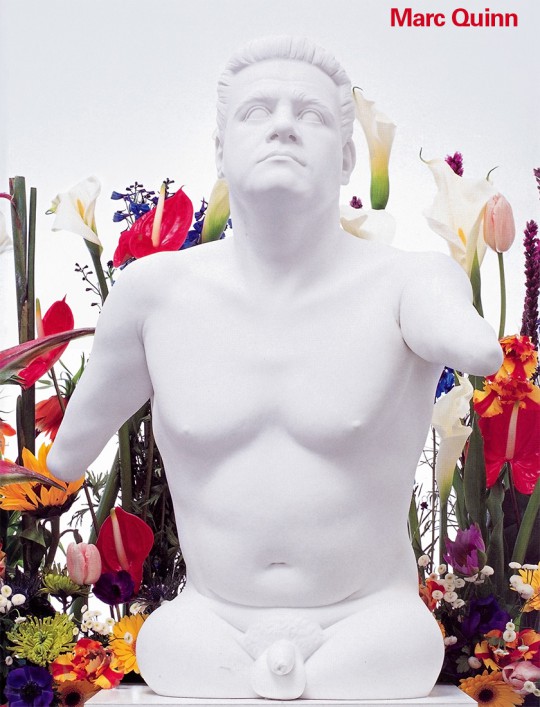