INFORMATION FOR THE PUBLIC
Following the provisions taken by the Italian government, Fondazione Prada's milan venue is closed until further notice.

“The production of Chinese porcelain made specifically for export started long before the arrival of the Europeans to China, via the sea routes in the early 16th century. But it was during the Ming dinasty (1368 –1644) that the export market became increasingly important, initially with the appealing celadon and underglaze blue porcelains during the 15th century, then quickly gathering momentum to become the first truly global commodity once the first Europeans started trading and commissioning porcelains to bring back to the West. Chinese export porcelain is indeed a commodity, often made for a clearly utilitarian purpose. But it is also an art manifestation, made by talented ceramists and painters, coveted and collected throughout the world. Its wide reach was not only relevant in economic terms, but also in securing a global presence for this artistic expression.”


Watch the full interview with the curators

“The Porcelain Room” is an exhibition curated by Jorge Welsh and Luísa Vinhais, that explores the historical context, scope and impact of Chinese export porcelain.

The project brings together examples of porcelain made between the 16th and 19th centuries for various markets, social and religious groups, particularly in Europe and the Middle East. This production demonstrates the ability of Chinese craftsmen and traders to respond to the demands and tastes of different targets.

The display, devised by Tom Postma Design, consists of a brown velvet-covered structure divided into three sections. The first part of the exhibition includes The largest number of early 16th to mid 17th century Ming dynasty porcelains with European iconography ever shown together. This production falls into the category of “First orders”, a term used to refer to the first commissions of Chinese porcelain by the Portuguese after their arrival in China. Existing examples of “First orders” are very rare, only 150 objects have survived to this day. Over 45 examples have been selected for this exhibition, on loan from major public and private collections around the world. The exhibited objects represent a wide range of European “First orders” in terms of type, iconography and period of realization. This first section also includes a small group of rare pieces made for the Islamic market.

The second part includes a wide selection of everyday objects with natural and surprising shapes, such as animals, fruits and vegetables. These Chinese tableware with a strong visual impact and exotic taste were made around 1760. They were part of extraordinary tableware created to entertain guests during dinners organized by aristocratic families in Europe.
The third section pays homage to the tradition of porcelain rooms, the magnificent installations created in European aristocratic palaces and houses in the 17th and 18th centuries. These rooms incorporated Chinese porcelain with mirrors, lacquer panels and gilded carved wood. Some of the most iconic cases still survive such as the ceiling of the Santos Palace in Lisbon, realized between 1667 and 1687 and the porcelain room at the Charlottenburg Palace in Berlin, built between 1695 and 1705.

This exhibition is part of a research that Fondazione Prada has undertaken to expand its activity beyond the boundaries of contemporary art. Without creating distinctions between visual arts, craftsmanship, design and serial production, the project reveals the creative value and the refined workmanship of the Chinese export porcelain to a wider audience and not only to experts. “The Porcelain Room” is set up in one on the 4th floor of Torre, which houses a selection of works from Collezione Prada. This choice triggers a dialogue between ancient and contemporary and a confrontation between collections of objects and installations from distant cultural universes. 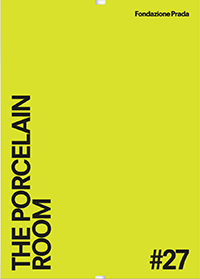