Curated by Germano Celant, the exhibition has been organized in collaboration with the artist and features about seventy works from public and private collections, both in Italy and abroad, illustrating Enrico Castellani’s (Castelmassa, Rovigo, 1930) output from 1958 to 1970. Characterized by a specifically historical approach, it focuses particularly on the first part of the artist’s career.

Beginning with experimentation into the expressive potential of the two-dimensional surface of the canvas, this concluded with Spazio Ambiente (Environment Space) of 1970 (a reconstruction of Ambiente bianco [White Environment] of 1967), attesting the artist’s new-found interest in the surrounding space. The exhibition begins with a number of his early works reflecting the influence of Art Informel, soon followed by an impoverishment of the gestural sign in favor of a progressive, systematic elaboration of such pictorial elements as the canvas and color. Castellani then switched his attention to the structured surface. In order to give it concreteness and vitality—hence mutable physicality—the artist put spherical elements (nuts) behind the canvas that formed reliefs, giving substance to the surface and, with their mutability, endowing it with dynamism and movement. The fortuity of the reliefs produced by the free movement of the nuts behind the canvas was surpassed in works in which Castellani experimented with the technique—which was to become characteristic of all his subsequent work—of putting nails into a framework behind the canvas.

The spatial division of the monochrome surfaces was investigated through diptychs and triptychs, reliefs with the upper edge and sides extended, as well as through optical motifs. From 1964 onwards, the colors initially chosen for the surfaces—black, blue and red—were replaced by monochrome works. Castellani entrusted his neutral and impersonal process of pictorial research to the color white, which occurred increasingly frequently and represented the identity of the canvas in its primary state.

Spazio Ambiente (Environment Space, 1967)—consisting of a room with white walls made of monochrome canvases, which are attached to a wooden framework and delimit the space with a complex system of reliefs and hollows—bears witness to an important stage in Castellani’s experimental art that, by expanding from the surface of the picture to the surrounding space, becomes unphysical and immaterial. 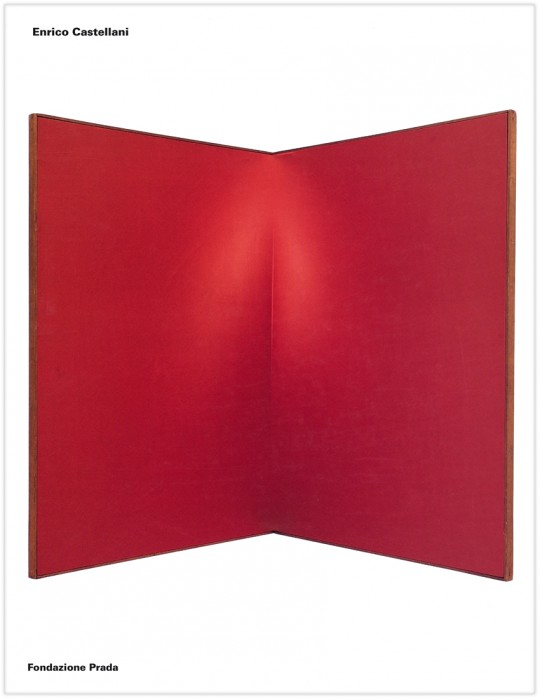