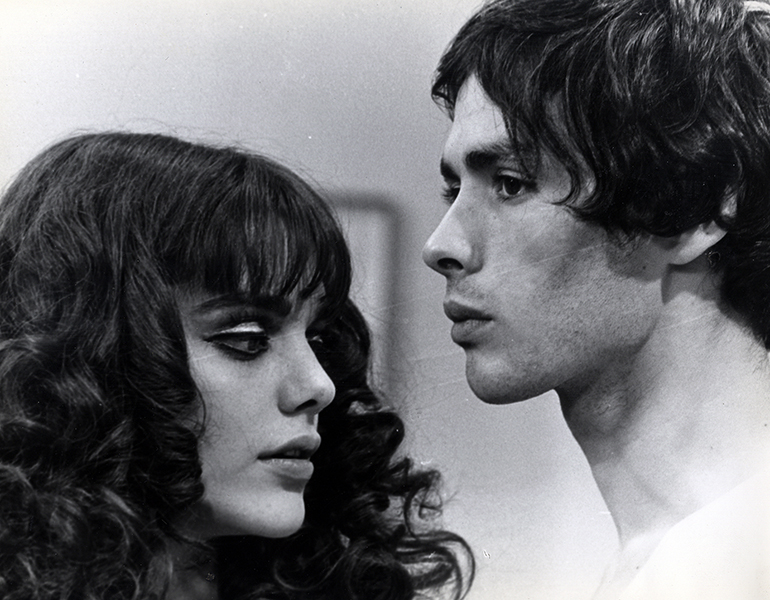 Giacobbe, an introverted and very neurotic teacher at a Roman drama school, bumps into an identical stranger on the Lungotevere, whom he invites into his home and hides from the eyes of his aging servant Petrushka. The “double”—this is the title of Dostoevsky’s early novella on which the film is based—agrees to take Giacobbe’s place to do those things in life that the teacher finds himself incapable of dealing with in person. Thus, he begins by substituting Giacobbe when it comes to awakening the senses of Clara, the daughter of Giacobbe’s school director, during a night-time flit in a luxury soft-top car. Later, during a lecture on Antonin Artaud, this disturbing figure, who we find out is a kind of serial killer opposed to the nascent consumer society, explains to the students that theater should be taken into the streets to spread “the poison [of subversion] in the body of society.” Switching from theory to practice, he gives a classroom demonstration of how to make a “Mayakovsky” type of hand-thrown bomb. Meanwhile, it becomes increasingly clear that the urban “spectacle” they are all preparing is none other than the Revolution. Unfortunately, when the day of the performance arrives, the students and their mentor expect each other at different times. And thus history is not made.