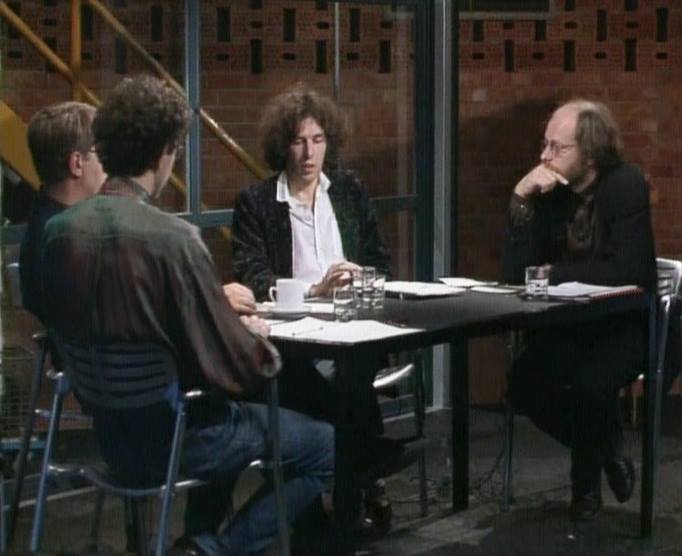 Experimental Belgian director Jef Cornelis (b. 1941) is among the first who explored the relationship between television and art, documentary and artist’s films. His work reconsiders the usual format of television reportage and focuses on reflection, discussion and the development of TV as a site for investigating the socio-cultural realm. During the years he worked at VRT (the Dutch-language Belgian public broadcasting corporation) – from 1963 until 1998 – Cornelis made over 200 films. Blending images, voice-over and text, the reportage “The Street” (1973) is a vivid case against motorized traffic in our cities; cars has destroyed the street and community life, and the aerial images reinforce this story of loss. Filmed inside a building site-like setting, made explicit by its own title, the TV program “Container” explored how art, architecture and culture are represented and talked about – all the while asking questions about the medium of television itself. Often broadcast during prime slots in the evening, the content and style of Cornelis’ television programmes interrupted the comfortable routine of home viewing, circumventing the pre-formatted styles and demands of mass media.

Through sound and image, director Jef Cornelis evokes the degradation of the street, a fragment of an unnatural and ruthless production system. Il film begins with images of a protest in a street, followed by shots of a motorway, filmed from above. Shots of Belgian cities, overrun by cars and trucks, alternate with idyllic sequences of places in Italy where children spend entire days on the street. The efficiency of traffic control also affects the shape and pattern of a new way of living. Residential areas have turned into traffic zones; inhabitants are pushed back into their homes. A document from the early 1970s in which the complex infrastructure of movement equipped to let traffic flow emerges, far from the original and spontaneous form of the street as a breeding ground for life.

Episode of the late ‘80s television series “Container” by Jef Cornelis, “Exotismen” is a conversation about the predominantly Western fascination with exotic cultures. Speakers theorize exoticism as a hinder to objective understanding of alien cultures: it confirms and reproduces rooted stereotypes and representations, creates dream worlds that influence our perspective, becoming an intercultural counterfeit. Is exoticism a projection mechanism of repressed fears and desires? Which is the limit among exoticism and racism?