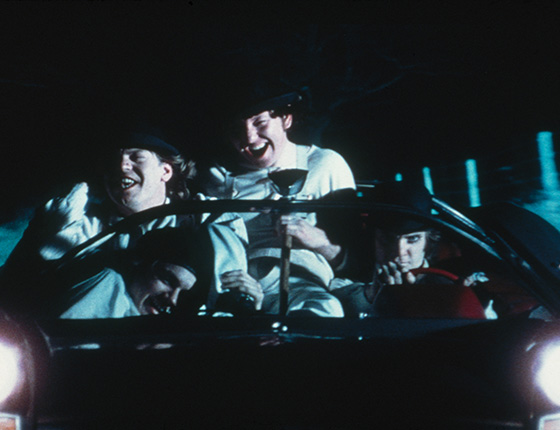 The recent documentary “Into the Garden of Glass and Steel” by the young Greek filmmaker Aristotelis Maragkos and Kubrick’s celebrated work are both set in London and inspired by dystopian novels of social satire, respectively “Super-Cannes” (2000) by James Graham Ballard and “A Clockwork Orange”(1962) by Anthony Burgess. Ballard’s novel explores how successful businessman are psychologically encouraged to indulge themselves in activities involving sex and violence, as a cure for stress. Kubrick defined his film as “a social satire dealing with the question of whether behavioural psychology and psychological conditioning are dangerous new weapons for a totalitarian government to use to impose vast controls on its citizens and turn them into little more than robots.” Following its release, the film was cited for alleged influence during some episodes of violence committed by young people and was considered diseducational by a part of public opinion. In 1973 “A Clockwork Orange” was then withdrawn from British release at the request of the director.

INTO THE GARDEN OF GLASS AND STEEL
13’, 2010
Original English version
PG18

Documentary exploring Canary Wharf, the economical centre of London; a narrator reads excerpts from the science fiction novel “Super Cannes” (2000) by English novelist, and satirist essayist James Graham Ballard.
Footage of corporate offices, public spaces, shopping malls are combined with a narrative dedicated to the invisible dynamics of the modern business environment. “Thousands of people live and work here without making a single decision about wright and wrong, the moral order in engineered into their lives along with the speed limit and security systems” (Super-Cannes, chapter 29)

The movie, mostly filmed on location in metropolitan London, is based on the dystopian satirical black comedy novel A Clockwork Orange (1962) by English writer Anthony Burgess, a running lecture on free-will. In a near-futuristic society, late teen Alex DeLarge is the leader of a gang of thugs – his “droogs” – who commit acts of “ultra-violence”. Upon his arrest and detention, Alex sees what he believes is an easy way out when the government looks for subjects to participate in a new rehabilitation therapy, the end result being release from prison after the two-week therapy. But the experiment ends up having consequences that Alex did not envision. One of the most controversial and acclaimed creation by Stanley Kubrick, presented in its restored version celebrating 50 years from its first release.