The monumental multimedia project conceived by Japanese artist Mariko Mori (Tokyo, 1967) for Fondazione Prada, is centered on the Dream Temple, a complex, ambitious architectural initiative that represents a utopian place, the ideal destination at the end of a path towards spiritual discovery. A journey that culminates in the hi-tech entrance to the flow of consciousness of each living being.

The exhibition consists of two spectacular and impressive visions—the Garden of Purification and the Space of Meditation—accessed through two initiation antechambers. Each step of the voyage features a single work and is characterized by a particular quality of light, one of the essential elements used by Mariko Mori to convey purity and universality. Light also means internal enlightenment, attained along the individual’s path towards self-awareness, a state in which the relation between exterior and interior light is defined.The journey through the exhibition opens with the Enlightenment Capsule (1998), a sculpture representing the fusion of advanced technology and mystic thought.

The Garden of Purification (1999) is an impressive space with an almost sacred impact, created by a white stretch of marine salt, chosen for the purifying qualities acknowledged by religions throughout the centuries. Half-way through the Garden of Purification the visitor encounters the Kumano (1997–1998), a color photograph made up of five giant-size panels in which the artist wished to cancel the boundaries between present, past and future, to transcend time and space.
The photographic works of the Kumano in the Garden of Purification and the video installation Kumano (Alaya) (1997–1998) arranged in the antechamber of the Space of Meditation are dedicated to the fusion of Buddhism and Shintoism. Both works depict a scenery of mountain woodlands, represented as a place of magic, where Mariko Mori appears in the guise of priestess while in prayer and performing a ritual dance.

At the center of the room stands the remarkable multimedia architecture of the Dream Temple (1999), inspired by the Yumedono, the Temple of Dreams in the Horuji Buddhist monastery built in 739 AD near Nara, in Japan. The overall architectural structure is transparent, bright and transient, like the hues of the aurora. Beneath the temple, a vast bed of transparent glass fragments enhances the surreal light of the raised structure, according to the criteria of purification envisaged by Japanese architectural tradition in the construction of ‘ideal’ buildings, that appears magical and shining. 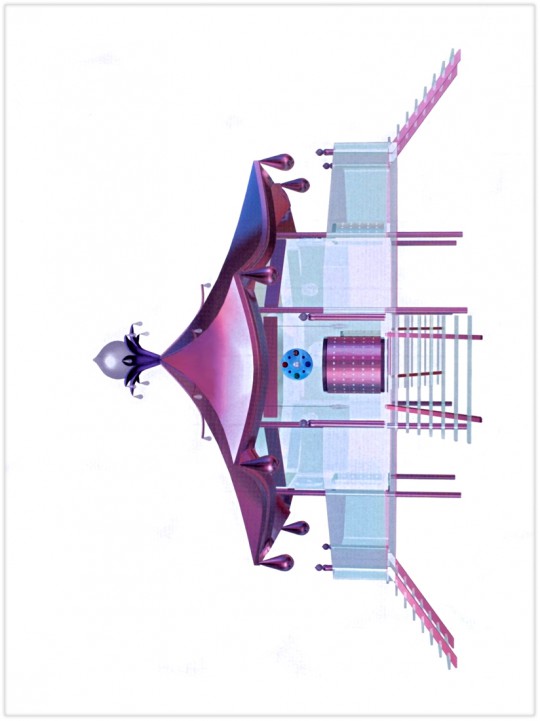