1 JUNE
Tickets to the special film screening of "Dolor y Gloria" on June 1 at 9 pm, in the presence of Pedro Almodóvar are sold out

The screenings program is published in the Cinema page.


“Soggettiva Pedro Almodóvar” is realized thanks to a close dialogue and collaboration with El Deseo (Madrid) and the producer Bárbara Peiró Aso.

“Soggettiva” series invites personalities from arts and culture world to share with the public the films that have marked their personal and intellectual education.

The fifth series of “Soggettiva,” conceived by Pedro Almodóvar and featuring 8 Spanish films and it will be accompanied by 9 cinematographic works realized by the director from 1983 to 2004 and 4 films produced by El Deseo, the company created by Pedro and Agustín Almodóvar.
“Soggettiva Pedro Almodóvar” will be launched with a special screening, open to the public, of his new film Dolor y Gloria (Pain and Glory), part of the official competition selection of the 72nd Festival de Cannes, at Fondazione Prada’s Cinema on Saturday 1 June at 9 pm, in the presence of the director. (Sold out)
Dolor y Gloria will also be presented in June on Saturdays 8, 22 and 29, as part of the “Indagine” section.

As explained by Almodóvar, “When I selected eight Spanish films, I mainly tried to include films that have stood the test of time and proved their worth as cinema. I also wanted to show to the Italian public a collection of films that has never traveled beyond the borders of Spain, at least not all of them and not very largely.”

Taking place at Fondazione’s Cinema from 6 June to 26 July, “Soggettiva Pedro Almodóvar” includes 4 films – Peppermint Frappé El Verdugo (The Executioner), 1969 by Luis García Berlanga; El espíritu de la colmena (The Spirit of the Beehive), 1973 by Víctor Erice; and Furtivos (Poachers), 1975 by José Luis Borau – realized during the last period of Francisco Franco’s dictatorship. In Almodóvar’s words: “leaving aside their undoubted inherent worth, these are films which had been clever enough to pick their way through Spain’s absurd and unbending censorship laws imposed on the country by the Catholic church.” The other 4 selected films – Arrebato (Rapture), 1979 by Iván Zulueta; Tésis (Thesis), 1996 by Alejandro Amenábar; Blancanieves (Snow White), 2012 by Pablo Berger; and Magical Girl, 2014 by Carlos Vermut – demonstrate the vitality and the relevance of Spanish cinema in the last four decades. In these films the directors were able to cross the borders of different genres and to create unexpected and modern works, such as an outrageous tale of self-immolation and capitulation to both heroin and cinema (Zulueta); an iconic teen horror movie (Amenábar); a silent, black and white film inspired to the Brothers Grimm fairy tale (Berger); and a disturbing and mysterious film reflecting a fascination for Japanese pop culture (Vermut).

“Soggettiva Pedro Almodóvar” will be accompanied by an illustrated publication in the Quaderni series, published by Fondazione Prada, consisting of an essay by film and culture critic Jordi Costa titled “Screened Desire” and devoted to Almodóvar’s work, and a focus on the eight Spanish films included in the selection. 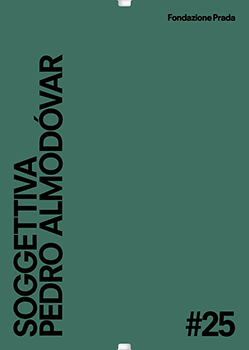